How much does it cost to buy a star

Have you ever wondered what it would be like to see your name or the name of a loved one in the stars?

Well, would you be willing to settle for having a star named after you or a loved one? You are a lot closer to making that a reality than you might realize.

Indeed, stars are currently available for you to purchase in your name or the name of someone about whom you care deeply. After claiming a star under the name of your choice, that star will live on forever as your star or the star of your loved one. Imagine that. Your star up in the sky among the moon and the planets.

In the following sections, the discussion will focus on how you can go about claiming your very own star from the Star Register website.

Can you really buy a star?

The answer to the titled question is an undeniable yes. You can buy a constellation star in your name or another name of your choice. You can also buy and name a supernova (bright star) or twin stars that would double your stake in the sky.

When you are ready to buy a star, you will only have one official place you can go. Star Register is the original and officially-recognized star registration service on the "planet." Their standing is only enhanced through the registry's partnerships with top organizations like NASA and Harvard Astronomy.

Star Register was founded in 1989 and since that time, the organization has been responsible for the naming and certifying of stars under the names of thousands of people. That includes celebrities whose stars might be hanging in the sky right next to your newly named star.

How much does it cost to buy a star

Star Register determines their pricing based on the type of stars that are available. It's up to you to decide how big of a stake you want to claim in the sky. Here is the price list for current options:

Supernova Star Kit @ $79.00 - name one of the brightest and rarest stars in the galaxy

What do I get after buying a star at Starregister.org?

With the exception of the $100 Voucher for Moon & Mars Land, each star kit will earn you the following:

A certificate of registration

A star chart and a photo of your star or stars

Star factsheet on your star or stars

Mobile app you can use to search registry

Free shipping of all documents

Note: You would also get the $100 Voucher for Moon & Mars Land with the naming of twin stars or a supernova star 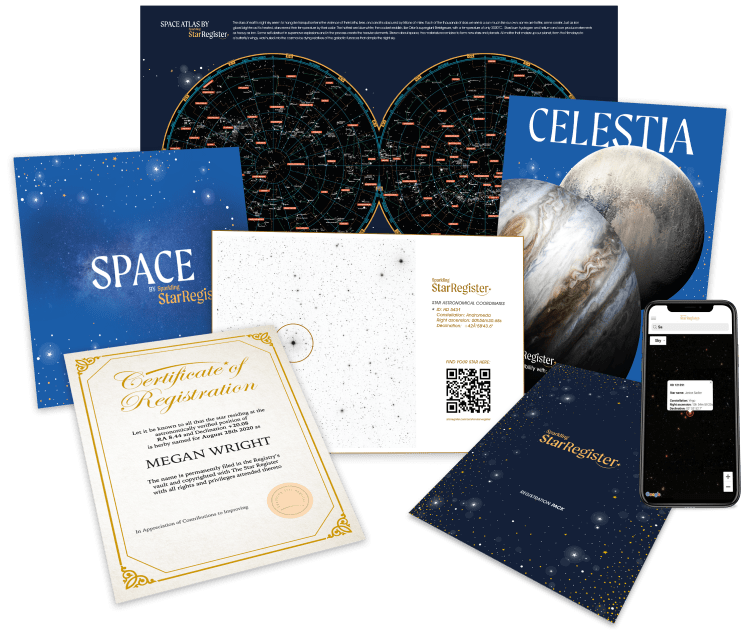 Why should I buy a star?

We live in interesting times when people are always looking for something unique, something a little off the beaten path, something that makes a statement. The number one reason you should buy a star is to stake your permanent claim on one little part of the universe in perpetuity.

Beyond staking your claim, there are a number of other good reasons you might want to buy a star. Those reasons would include:

That's not all. In the world of romantic gift ideas, it would be hard to beat presenting your loved one with a permanent remembrance of your love, that being twin stars in both of your names.

We live until we cease living. During our lifetimes, we leave very little behind that serves as a memory that we ever existed. When you buy a star and name it under your name or the name of a loved one, it ensures someone's place in this universe will last a million lifetimes.

Imagine for a moment that you are strolling on the beach on a moonlit evening when the stars feel so big and close that you feel like you could reach out and touch them. What you know in your heart and mind is that somewhere in that big universe is a star that bears the name of someone or something that is special to you.

Out of the corner of your trained eye, you catch a glimpse of that very star. For that single moment in time, you feel like you are a very small but special part of something that is very big.

Indeed, Star Register has developed a very special way for people to say something to others in a way that is hard to imagine. Star register has kept the star-naming process easy to complete at a price that most anyone should be able to afford.