Constellations allow us to easily identify groups of stars based on what they look like to an observer on Earth, and they are typically named after their shapes. As you may have guessed from the name, the Lyra Constellation takes its name from the Lyre, which is a musical instrument from history.

However, there’s a lot more to a constellation than just its name. In this guide, we’re going to explore the facts about the Lyra Constellation, including its position, the stars that it contains, as well as the mythology behind its name.

What is the Lyra Constellation?

The Lyra Constellation can be found in the northern sky, and it contains one of the brightest stars in the night sky, Vega. Along with Vega, Lyra Contains other astral phenomena such as Messier 57, which is a planetary nebula (AKA the Ring Nebula) as well as Messier 56, a globular cluster.

Despite containing one of the night sky’s brightest stars, the Lyra Constellation is actually one of the smaller ones in the sky, being the 52nd largest constellation.

It occupies an area of 286 square degrees and you’ll find (side tip: use a star finder ) it in the Northern Hemisphere’s fourth quadrant, which is known as NQ4.

The latitudes from which the Lyra Constellation can be seen range from +90 degrees to -40 degrees. There are four neighboring constellations to Lyra:

There are also four stars that have been formally named (have had their names approved by the International Astronomical Union) in the Lyra Constellation: 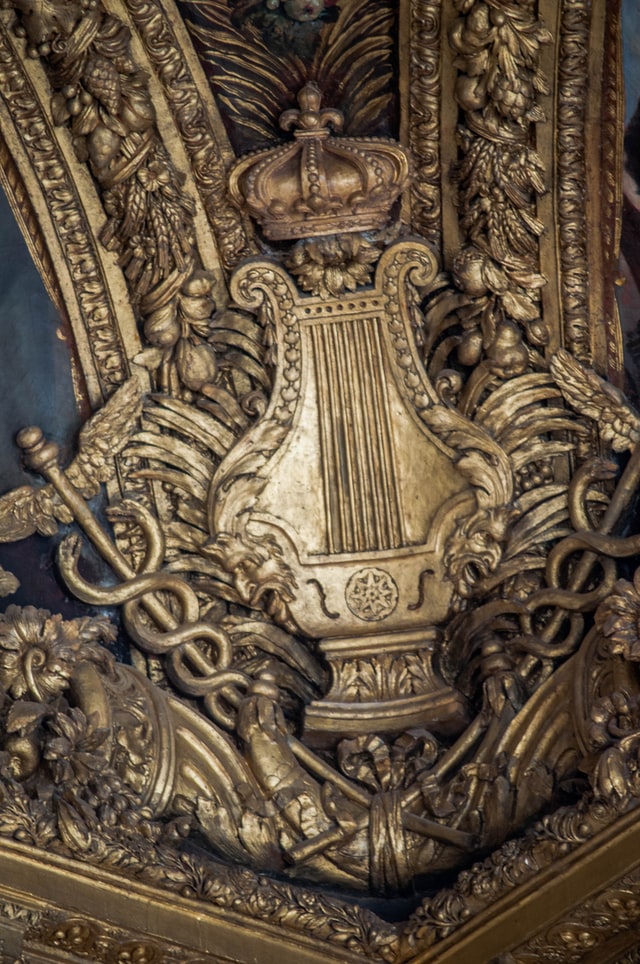 So how did this constellation come to bear the name of the lyra?

It all starts with the myth of Orpheus, who is the most famous poet and musician of Greek mythology. Orpheus was born to a Thracian king named Oeagrus as well as the most famous of the muses: Calliope.

Apollo met Orpheus when he was young and gave him a golden lyre. Throughout his childhood, Orpheus learned how to make music from both Apollo and Calliope. Throughout his life, Orpheus ended up accompanying Jason and the Argonauts on their journey and spent much of his time trying to save Eurydice, his wife, from Hades.

Unfortunately, Orpheus eventually came across Maenads, a Thracian who took offense to Orpheus’s lack of tribute to Dionysus. After ripping his body apart, the golden lyre that came to symbolize Orpheus was thrown into the water.

Recognizing Orpheus’s greatness, Zeus sent a bird of prey to retrieve the lyre and Orpheus’s body and had him carried up to the stars. In many depictions of the constellation, the bird of prey is present, holding Orpheus’s lyre in the night sky.

Vega is the best-known star in the Lyra Constellation because it is one of the brightest objects in the night sky and the second brightest star in the northern sky, just falling short of Arcturus. Vega is 25 light-years away from Earth.

Vega is a white dwarf star and it’s about twice the size of the Sun despite being ten times younger than the Sun. Yet another quirk about Vega is that it features a disk of dust around its circumference because of the infrared radiation that it emits.

While astronomers aren’t sure, Vega may also have a planet as large as Jupiter orbiting it. Further details are difficult to make out.

Along with its brightness, Vega’s position in the sky makes it easier to spot because it lies at the vertex of the Summer Triangle, the other points of which are made up of Altair and Deneb.

Sulafat is a blue-white giant that is 620 light years away from the sun and features an apparent magnitude of 3.261. The star’s name comes from the Arabic word for turtle, and it’s about 15 times larger than our Sun in terms of radius.

Sheliak is yet another system with an Arabic name, derived from the Arabic word for “constellation.” What is impressive about this system is that it is a binary star system. You’ll find Sheliak about 960 light years away from our planet.

Yet another notable thing about this system is that it features variable luminosity, which ranges between 3.4 to 4.3 magnitudes. This was first discovered in 1784 by John Goodricke, a British astronomer. The reason for this variability is that the stars circle around each other and sometimes eclipse one another.

The primary star in the system is known as B7II, which is a blue-white bright giant. The other star is difficult to detect because of the accretion disk that surrounds it, but preliminary investigation seems to suggest that the second star is a class-B star.

This is one of the most famous objects in the Lyra constellation due to how easy it is to spot and its popularity with amateur astronomers. The nebula was originally formed when a red giant star expelled ionized gas while it was becoming a white dwarf. Its central PNN was discovered in 1886 by Jeno Gothard

While the Ring Nebula may look like a two-dimensional ellipse when viewed from Earth, it's actually shaped more like a donut. Messier 57 is a bipolar nebula, and it features an apparent magnitude of 8.8.

The nebula itself was discovered in 1779 by Antoine Darquier de Pellepoix, but it was also discovered by Charles Messier less than a month later and added to his catalog, explaining its current name.