As one of the most famous constellations in the world, Orion has been the subject of countless myths, legends, and cosmological studies across time. From scientific measurement to astrological interpretation, everyone wants a piece of "The Hunter."

But what's the Orion constellation really like? Where is it? How did it form? Where did it get its name? Is it as timeless as it appears?

If you're interested in Orion, you've come to the right place. Let's talk about the hunter and what he's actually doing up there!

The Orion Constellation: The Basics

Named after Orion, a mighty hunter in Greek mythology, Orion is a highly visible constellation in the night sky. It has seven bright stars that form an hourglass shape, including three in a straight line that make up his belt.

Other stars are part of Orion, too, though they're lesser known than the big seven. These make up his sword, shield, club, and head.

Another noteworthy aspect of Orion is the Orion Nebula, one of the most-famous and most-photographed nebula in the world.

How was Orion formed?

The stars of Orion were formed the same way as other stars. In simple terms, they were born from clouds of space dust that started using hydrogen to generate heat and emit light. Their hourglass shape was a coincidence: We, as humans, are the ones that looked at their pattern and decided that it looked like a man.

Stars are incredibly hot. The hottest stars in the universe can reach temperatures of 40,000 Kelvin or more, which translates to around 71,540°F. However, even the coldest stars are hotter than us and our planet.

For a more detailed look at star formation, see: What are stars?

Where is the Orion constellation located?

Orion is located on the celestial equator, an imaginary line based on celestial poles. You can think of it as the space equivalent of the Earth's equator.

Stars can vary in terms of size, color, and temperature, including the stars in Orion. Some, including the ultra-bright Rigel and Betelgeuse, can be seen with the naked eye. Others require a telescope.

Orion's hourglass shape is clearly visible in the night sky. These consist of two parallel stars at the top and bottom of his figure as well as three stars in a straight line in the center. The outer stars make up Orion's upper and lower body; the inner stars are the belt at his waist. 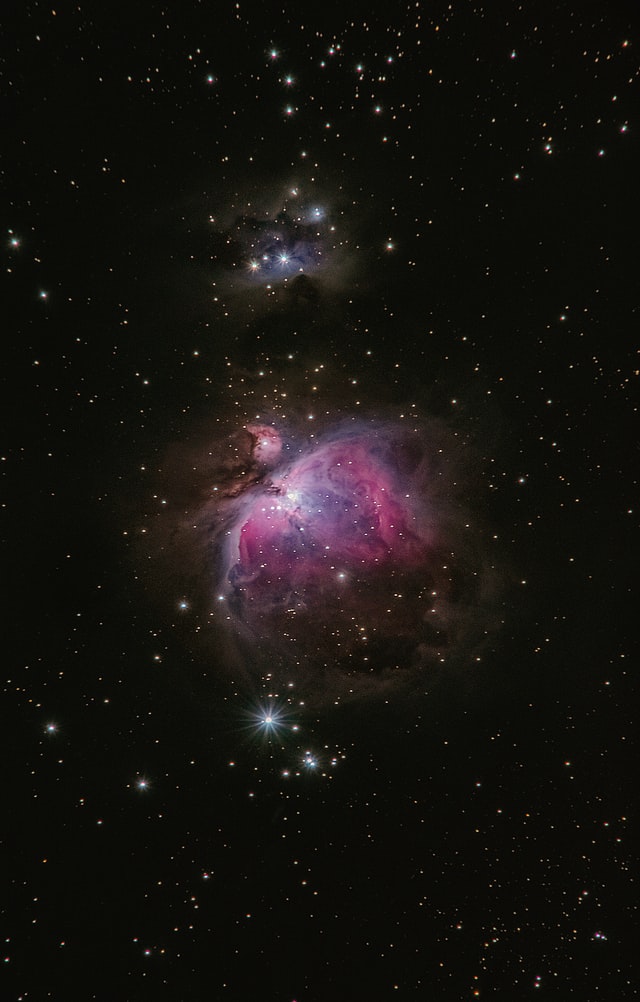 Does Orion have shooting stars?

Yes! If you've always wanted to see a shooting star, mark your calendar for the first week of October. This is the onset of the Orionids meteor shower, an annual event where meteors can occur at rates of 50 – 70 per hour. They aren't always visible with the naked eye, especially if you live somewhere with a lot of light pollution, but astrophotographers catch them all of the time.

What types of stars are in Orion?

Even though the hunter's stars might look the same through the eye of a telescope, they're actually quite different! Some are hotter, cooler, brighter, dimmer, nearer, and farther than others. This is because there are many types of stars in the night sky.

Orion is comprised primarily of blue stars, which are also known as blue giants. These are hotter and brighter than others, and they're the reason why Orion is so visible as a constellation.

Other stars in Orion are smaller, cooler, and more distant, so they're harder to see. These include the stars that make up Orion's accessories like his sword and his shield. Some are even dwarf stars.

Are there any planets in Orion?

Yes. Though small and little regarded, many of the stars in Orion have planetary systems attached to them. You might want to read more about the difference between stars vs planets to truly understand how this works.

Orion is home to almost 2,000 stars, but a few stand out more than others. These include the seven that make up his "body" as well as bright and visible star clusters in other areas around his figure. Let's take a look at a few of the most prominent of Orion's stars!

The most well-known star in the Orion constellation is Rigel. As a blue supergiant, it's both massive and incredibly bright; it's actually one of the brightest stars in the entire night sky. Even though it's about 860 light-years from us, it still emits enough light to be seen with the naked eye. Its spectral classification is B9. You can find it in Orion's left foot.

Fun fact about Orion: It's burning so much hydrogen as a larger-than-life star that, when it dies, it'll explode into a supernova and leave behind a black hole.

Another prominent star in Orion is Betelgeuse. It's the second-brightest star in the constellation after Rigel, and it's classified as a red supergiant with the spectral classification of M1. You can find it in Orion's shoulder region. Some cultures have given it names like "the armpit of the mighty one."

Fun fact about Betelgeuse: For various reasons, we can't determine its distance from us. Our best guess is that it's somewhere between 600 - 700 light-years away.

She's more than just a Harry Potter character! Bellatrix is the third-brightest star in Orion, and with a spectral classification of B2, she exists as a blue giant that's several times brighter and hotter than the sun. She's about 250 light-years from Earth, and you can find her in Orion's shoulder.

Fun fact about Bellatrix: The star has a reputation for female empowerment. Other cultures have given it names like "the Amazon Star," and the word bellatrix in Latin is translated as "female warrior."

The Belt of Orion is a trio of stars that appear to be more or less in a straight line. As you might have guessed, they make up Orion's belt, and they're often used to locate the hunter's figure in the night sky. Their names are Alnitak, Alnilam, and Mintaka.

Fun fact about the Belt of Orion: They have many names around the world. These include "string of pearls," "string of three," "three kings," "three sisters," and "three Marys."

The Orion Nebula is a very famous nebula. You've probably seen pictures without even realizing it! Though only faintly visible to the naked eye as a smudge around Orion's belt, it's been the subject of many colorful, spectacular photos in high-detail astrophotography.

The Orion Nebula is also home to a few well-known deep space objects such as the Horsehead Nebula, the Flame Nebula, and Barnard's Loop.

Can you name a star in Orion?

It's always fun to name a star, and if you feel a connection to the great hunter, the Orion constellation can be the perfect place for it. You can name your star whatever you'd like, including something sweet, silly, romantic, or in memoriam. Here are the steps:

Choose a "star kit." They range from the basic to the deluxe and can include things like photos, star charts, an official certificate of registration, and an engraved brass-plated plaque.

Fill out a form with all of the relevant details, including your chosen name.

Wait for your certificate to be mailed and your name to be added to the Star Register!

The Never-Ending Mythos of Orion

The oldest depiction of the Orion constellation dates back more than 35,000 years. It was carved into a cave wall with mammoth ivory tools. With our high-tech, deep-space cameras, we've come a long way since then, but we're still just as fascinated as early civilizations by the giant hunter looming in the night sky. Here's to you, Orion!